First off, thanks to everyone who dropped by at MCBS on the weekend. I thought it was a really good day. Thanks Andy ( that’s Mr FYXO if you weren’t aware ).
Anyway, I think I may have mentioned after Christmas that I had returned from holidays with a Michalo frame in need of some tlc. Jeff had this frame built by Ron Mitten in 1987 ( according to the stamp in the BB shell ) but it had suffered through a number of salt laden winters in the coastal town of Port Fairy here in Victoria. Jeff had used it as a training bike in recent years and given the condition of the forks he asked me to have a look at it.

He had been running a 10spd rear hub in a rear end spaced for 7spd so he wanted to spread things out to make that work a little better as well. I discovered that there was a crack in one of the chainstays and decided that the best thing to do was build a new fork for the front. I sent the frame off to have the chrome stripped off so that I could replace that stay and measured up the old fork to replicate it.
Unfortunately, and Jeff knew the likelihood of this when he handed it over I had to cut the stem off to get it out. Another casualty of the environment.

Anyway a month later it came back from the chromers and I replaced the chainstay, reset the rear end and in the meantime had built a new fork. Jeff had wanted to maintain a threaded fork and I ordered a nice new Chris King 2 nut threaded headset. I then sent it off to Kevin Wigham for paint along with a set of decals made up by Greg Softley. It came back about 10 days prior to MCBS and I would have loved to show it there but Jeff was in Melbourne for personal reasons and we agreed that picking it up then was the best thing for everyone. This job took a long time from start to finish. Most of that time was time spent away from my shop and in the shops of others, but I hope you agree the finished result is really nice 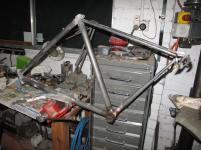 Michalo with the chainstay removed 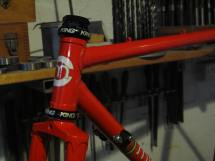 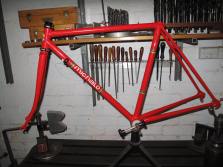 Michalo, refreshed and ready to go

Posted by gdukebicycles on June 29, 2015 in Uncategorized

Heading to the Melburn Custom Bike Show tomorrow. http://fyxo.co/melburn-custom-bicycle-show/ Stall 7 See you there

Posted by gdukebicycles on June 26, 2015 in Uncategorized